About | At A Glance | Awards | Rumours Of Glory – a memoir | Guitars


To view above bio in standard pdf viewer click here. Thanks to Richard Patterson and Daniel Keebler.

Bruce Cockburn: Kicking at the Darkness

For 40 years, this Canadian musical legend has been capturing in song the essence of human experience – while fiercely striving to make it better.

One of Canada’s finest artists, Bruce Cockburn has enjoyed an illustrious career shaped by politics, spirituality, and musical diversity. His remarkable journey has seen him embrace folk, jazz, rock, and worldbeat styles while travelling to such far-flung places as Guatemala, Mali, Mozambique, and Nepal, and writing memorable songs about his ever-expanding world of wonders. “My job,” he explains, “is to try and trap the spirit of things in the scratches of pen on paper and the pulling of notes out of metal.” 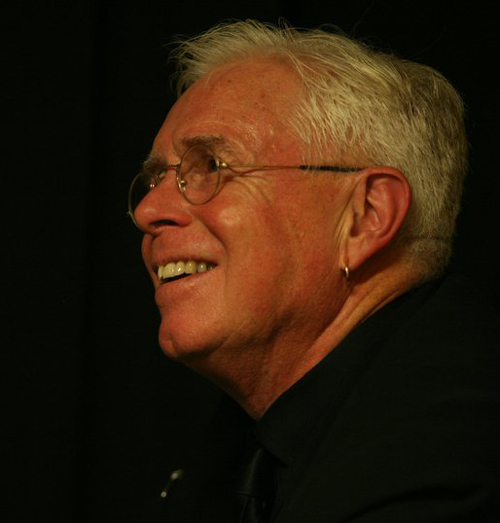 That scratching and pulling has earned Cockburn high praise as an exceptional songwriter and a revered guitarist. His songs of romance, protest, and spiritual discovery are among the best to have emerged from Canada over the last 40 years. His guitar playing, both acoustic and electric, has placed him in the company of the world’s top instrumentalists. And he remains deeply respected for his activism on issues from native rights and land mines to the environment and Third World debt, working for organizations such as Oxfam, Amnesty International, Doctors Without Borders, and Friends of the Earth.

Throughout his career, Cockburn has deftly captured the joy, pain, fear, and faith of human experience in song. Whether singing about retreating to the country or going up against chaos, tackling imperialist lies or embracing ecclesiastical truths, he has always expressed a tough yet hopeful stance: to kick at the darkness till it bleeds daylight. “We can’t settle for things as they are,” he once warned. “If you don’t tackle the problems, they’re going to get worse.”

For his many achievements, the Ottawa-born artist has been honoured with 12 Juno Awards, an induction into the Canadian Music Hall of Fame, and a Governor General’s Performing Arts Award, and has been made an Officer of the Order of Canada. But he never rests on his laurels. “I’d rather think about what I’m going to do next,” says Cockburn. “My models for graceful aging are guys like John Lee Hooker and Mississippi John Hurt, who never stop working till they drop, as I fully expect to be doing, and just getting better as musicians and as human beings.”

His commitment to growth has made Bruce Cockburn both an exemplary citizen and a legendary artist whose prized songbook will be celebrated for many years to come.

Music journalist and historian Nicholas Jennings is the author of the national best-seller Before the Gold Rush: Flashbacks to the Dawn of the Canadian Sound.

Bone On Bone, Cockburn’s 33rd album, arrives with 11 new songs, including “3 Al Purdys,” a brilliant, six-minute epic that pays tribute to Purdy’s poetry. Cockburn explains its genesis: “I went out and got Purdy’s collected works, which is an incredible book. Then I had this vision of a homeless guy who is obsessed with Purdy’s poetry, and he’s ranting it on the street. The song is written in the voice of that character. The chorus goes, ‘I’ll give you three Al Purdys for a twenty dollar bill.’ Here’s this grey-haired dude, coat tails flapping in the wind, being mistaken for the sort of addled ranters you run into on the street—except he’s not really ranting, he’s reciting Al Purdy. The spoken word parts of the track are excerpts from Purdy’s poems. After that, once the ice was broken, the songs just started coming.”

Cockburn’s rugged fingerpicking style on the Dobro perfectly matches Purdy’s plainspoken words and the grizzled voice of his street character. A similar guitar style can be heard on two of the next songs Cockburn wrote, the gospel-like “Jesus Train,” and “Café Society,” a bluesy number about people who gather at his local coffee shop to sip their java and talk about the state of the world.

There’s a prevalent urgency and anxious tone to much of the album, which Cockburn attributes to living in America during the Trump era. But, more than anything, Bone on Bone amounts to the deepest expression of Cockburn’s spiritual concerns to date. The 12-time Juno winner and Canadian Music Hall of Fame inductee turned away from traditional Christianity in the mid-1970s toward a quest for the more all-inclusive mysticism he documents in his memoir. And it’s that kind of spirituality that figures prominently in “Jesus Train” and “Twelve Gates to the City.” In “Looking and Waiting,” Cockburn sings of “scanning the skies for a beacon” from the divine.

“It’s a song of faith and frustration,” says Cockburn of the latter. “…Tired of looking in from the outside. My MO has always been to be aware of the divine…that dimension…always dealing with being stuck in a kind of observer’s position with respect to all that. I know it’s there. I don’t really see as faith so much as knowledge. Others may have different ideas about those things, but for me, I don’t have to struggle to believe in God, or the notion that God cares what happens to me. But I do have to struggle with being in a conscious, intentional relationship. That underlies a lot of these songs.”

“Forty Years in the Wilderness” ranks alongside “Pacing the Cage” or “All the Diamonds” as one of Cockburn’s most starkly beautiful folk songs. “There have been so many times in my life when an invitation has come from somewhere…the cosmos…the divine…to step out of the familiar into something new. I’ve found it’s best to listen for, and follow these promptings. The song is really about that. You can stay with what you know or you can pack your bag and go where you’re called, even if it seems weird…even if you can’t see why or where you’ll end up.”

“Forty Years in the Wilderness” is one of several songs that feature a number of singers from the church Cockburn frequents, for the sake of convenience referred to in the album credits as the San Francisco Lighthouse “Chorus.” “The music was one of the enticements that drew me to SF Lighthouse. As I found myself becoming one of the regulars there, and got to know the people, I felt that I really wanted all these great singers, who were now becoming friends, to be on the album. They were kind enough to say yes!” Among other songs, they contribute call-and-response vocals to the stirring “Stab at Matter.” Other guests on the album include singer-songwriters Ruby Amanfu, Mary Gauthier, and Brandon Robert Young, along with bassist Roberto Occhipinti, and Julie Wolf, who plays accordion on “3 Al Purdys” and sings with the folks from Lighthouse, together with LA songwriter Tamara Silvera.

Two other songs should be noted. The environmental warning “False River” came about at the invitation of Yvonne Bloomer, the poet laureate of Victoria, British Columbia. Bloomer was seeking a poem about the controversial Kinder Morgan Trans Mountain Pipeline. “Pipelines have their own perils that we’re all aware of,” says Cockburn, “so I started writing what was meant to be a spoken-word piece with a rhythm to it. But it evolved very quickly into a song.”

“States I’m In,” which opens the album, conjures up feelings of mystery and dread. “It’s literally a ‘dark night of the soul’ kind of song,” Cockburn explains, “as it starts with sunset and ends with dawn. It passes through the night. The song is about illusion and self-delusion, looking at the tricks you play on yourself.” He adds: “Maybe it’s also a play on words about me living in the States.”

Cockburn, who won the inaugural People’s Voice Award at the Folk Alliance International conference in February and will be inducted into the Canadian Songwriters Hall of Fame in September, continues to find inspiration in the world around him and channel those ideas into songs. “My job is to try and trap the spirits of things in the scratches of pen on paper and the pulling of notes out of metal,” he once noted. More than forty years after embarking on his singer-songwriting career, Cockburn keeps kicking at the darkness so that it might bleed daylight. ~ Nicholas Jennings, Bernie Finkelstein & Bruce Cockburn

Well we're in for some more pretty cold nights this week here in Prince Edward County It's very pretty with all the snow but still very cold. Here's Bruce Cockburn's take on it. "Coldest Night Of The Year". ... See MoreSee Less

Bruce Cockburn - The Coldest Night Of The Year (Toronto)

Saw another slideshow with this song, but seeing as it is lyrically tied to Toronto I decided to do my own version with some CC material from Flickr. Quickl...

Hi, Here's Bruce Cockburn's "Radium Rain" It's from Big Circumstance the same album that has "If A Tree Falls". It's Bruce's encounter with the fallout from Chernobyl. Do you know that Canada had quite a role to play in the second world war's Manhattan Project which led to the making of the atomic bombs that were dropped on Japan. Here's the song: ... See MoreSee Less

Join Bruce Cockburn for #CheersTo50Years – a career retrospective! He’ll tell the stories behind some of his biggest songs and play an hour of music close to his heart. Listen Friday at 6 ET, Saturday at 11 ET, and Sunday at 8 ET on ch. 359, or anytime in the SiriusXM app. Siriusxm.ca/BruceCockburnNA ... See MoreSee Less

Bruce Cockburn has recorded many wonderful instrumentals including two fully instrumental albums, one being Crowing Ignites and the other being the compilation Speechless. Here's one of his best instrumentals, although there are many that could qualify as best, "Water Into Wine". Originally on the 1976 album In The Falling Dark and then reprised on the Speechless album in 2005. Here's "Water Into Wine' ... See MoreSee Less

My all time favourite line in any poem or song and continues to be my long standing philosophy for life . . . thanks Bruce Cockburn. No matter what life throws I simply just have to keep kicking . . . Happy New Year <3 ... See MoreSee Less