Here's Bruce Cockburn's "If I Had A Rocket Launcher" from the Stealing Fire album. One of his most, or probably the most controversial song he's written and recorded. A wonderful record and with what we thought at the time was a very adventurous and poignant video. I still think that's still true. www.youtube.com/watch?v=N7vCww3j2-w ... See MoreSee Less

BRUCE COCKBURN - If I Had A Rocket Launcher

Bruce Cockburn joins Jackson Browne, Shawn Colvin, Michael Franti and many others for this Dream Concert with all proceeds going to the Native American Scholarship Fund and hosted by Verde Valley School in Arizona. ... See MoreSee Less

Well after an absence of many years Jackson Browne has revived the Native American Scholarship Fund benefit concert for the Verde Valley School in Arizona. I can't remember how many times Bruce played those wonderful concerts but it was several and each one was very special for a great cause and always with great artists and audiences. Be great if you could join us on October 10 for what Jackson has called the Dream Concert. Here's some info. fans.live/livestream/20201010-dream-concert/ ... See MoreSee Less

Hi, Bruce's manager Bernie here. We're sorry to have to tell you that all of the October/November 2020 shows are in the process of being postponed and or cancelled. For those who have tickets you'll need to speak to who you bought the tickets from to get info on either holding on to them until there's a confirmed show or getting a refund. We don't know yet what shows will be rebooked but it's likely that they will not happen until either October or November of 2021. Sorry for the inconvenience this is causing you but safety is of the first concern for all of us. We greatly appreciate your support and can't wait to get back on the road. PS: As we rebook shows we will post that info here on the Facebook page and Bruce's website. ... See MoreSee Less

Hi, So this week on Sept 25 True North releases the Bruce Cockburn box set aptly titled "Bruce Cockburn True North A 50th Anniversary Box Set ". There are 3 different vinyl albums in the box 2 of them are double albums: The Charity Of Night and Breakfast In New Orleans Dinner in Timbuktu and Bruce's first album which is self titles. All of the albums are remastered and pressed on colour vinyl. Here's a live version of the best known song from the Breakfast album "Last Night Of The World". www.youtube.com/watch?v=02TUsZzF6es ... See MoreSee Less

Bruce Cockburn Live . The Last Night Of The World

Bruce Cockburn Live . The Last Night Of The World 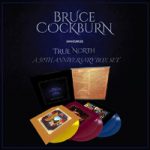