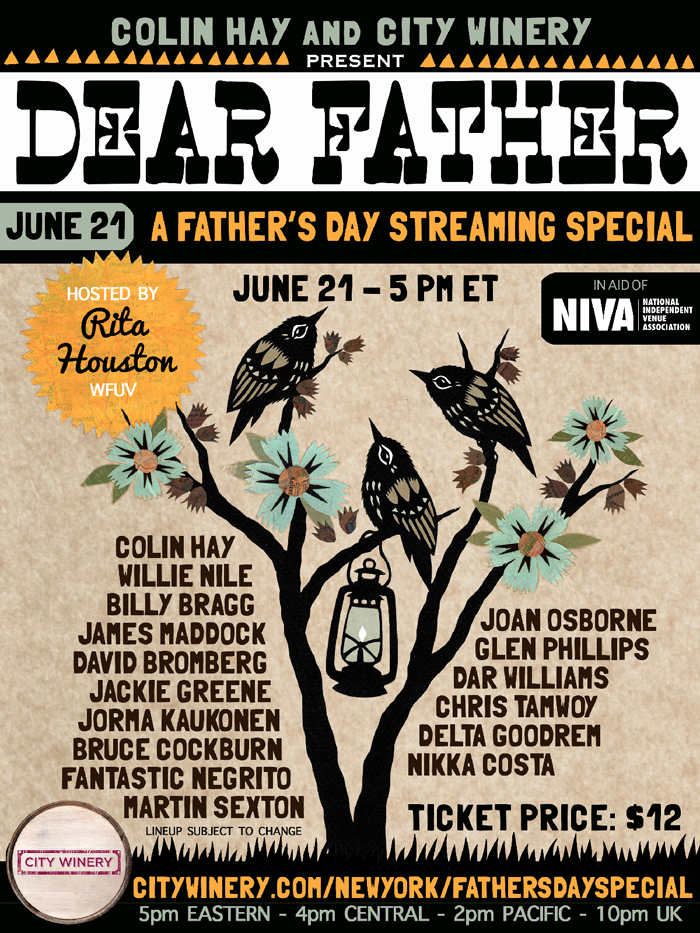 Families around the world will be able to connect virtually through this shared experience, celebrating all fathers everywhere through music, providing much needed art and entertainment at home. This streaming event builds on the success of a popular Mother’s Day stream co-produced by City Winery and Billy Bragg.

Tickets for the performance are available here. Proceeds will support the efforts of NIVA (National Independent Venue Association) working to preserve independent performance venues across the United States.

Over the course of his 40-plus-year career, Colin Hay has performed at many of the NIVA venues that are fighting to survive during the COVID-19 pandemic. NIVA continues to lobby Congress to provide relief to venues noting that music venues were among the first businesses to close at the onset of this crisis and they may be among the last to reopen. Hay is eager to support other artists and independent venues while providing welcomed entertainment for fathers and fans to enjoy at home.

“City Winery came to me, and asked me to be part of a Father’s Day streaming event, the proceeds going to NIVA”, says Hay.

“I like independent venues, they have character, they have the personalities of the people who run them, and work in and around them. I’ve played many of them, and would like to continue to. This streaming concert may help in some small measure, to keep them alive.”

Hay continues to be inspired by his father. “I think about my father all the time, he’s gone now. He was on the stage when he was young, in theaters, in Glasgow and beyond. Whenever I play across the country, he comes with me. There’s a lot to be said for tradition.”