Bruce Cockburn’s 32 songbooks are described as the heart of the McMaster library Archive collection.

May 3, 2013 – The date on the notebook page is April 11, 1983. Bruce Cockburn was in the midst of putting together songs for Stealing Fire, the politically charged album that would finally gain the Canadian musical icon recognition in the United States, lionized by the left and vilified by the right.

You can see that Cockburn returned to this page several times. The handwriting starts off in green ink, but there are edits in black and then blue. Scribbles and deletions criss-cross the page.

On the right-hand side is a hastily scrawled margin, encasing a list of more than 25 words. Each one rhymes with hate.

The page displays no title, but this where Cockburn’s If I Had a Rocket Launcher took shape — at least on paper, the inspiration for the controversial song came two months earlier during a visit to a Guatemalan refugee camp.

The words “shot down” are replaced by the more direct “murdered.” The name of Guatemalan dictator “Rios Montt” is simplified to “generals.”

Surprisingly, the phrase “that son of a bitch would pay” is lined out for “I’d make somebody pay.”

The stricken phrase eventually returns in Cockburn’s final edit to close the song with the chilling “some son of a bitch would die.”

The pocket-sized black book is one of 32 found in the Bruce Cockburn Collection, a new addition to the McMaster University Archives at Mills Memorial Library.

Cockburn has even parted with three of his prized guitars — a 12-string Guild, a Little Martin travel guitar, and a handcrafted Manzer with quotations by former Czech president Vaclav Havel and French philosopher Jean-François Lyotard written on its body in silver marker.

In all, the collection takes up 63 boxes of varying size. The carefully prepared catalogue, listing every item, takes up 64 pages.

It’s the 32 notebooks, however, that form the collection’s core. They cover the years 1969 to 2002 and show how Cockburn’s songs took shape, the outpourings of a creative mind at work. Among the random thoughts and jottings are remnants of poetry, recipes, drawings and doodles, even reminders on how to make overseas phone calls.

“For years, I made a pretty religious practice of carrying around a notebook with me all the time because I found that if I got an idea and I didn’t write it down right away, it was gone,” Cockburn said in an interview Wednesday from his home in San Francisco, where he has recently settled with his wife, MJ, and 18-month-old daughter, Iona.

Cockburn said McMaster officials first approached him about acquiring his collection in 2009 after the university presented him with an honorary doctorate.

“It’s something I hadn’t given a lot of thought to other than in a very general way. I had been saving all this stuff and at one point I figured I might try to see if somebody was interested in taking it over,” said Cockburn, 67.

“McMaster approached me and asked if I was interested … It’s a major university and they were interested. I figured they would treat it with respect.

“I gave them everything I had collected up until the year 2000, basically. I didn’t give them family photographs and things like that. It’s stuff that is related to my so-called career, however tangentially. There is quite a range of stuff but it all has something to do with my time in the music world.”

END_OF_DOCUMENT_TOKEN_TO_BE_REPLACED

Cockburn thanks Mac for taking his ‘mongrel assortment’ 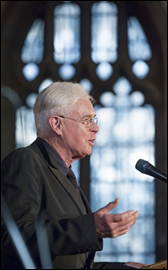 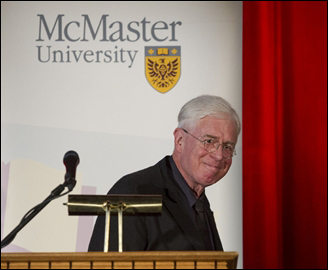