Americana Highways recently spoke with Bruce Cockburn about his new instrumental album, Crowing Ignites, due to be released September 20th. Here is what transpired. 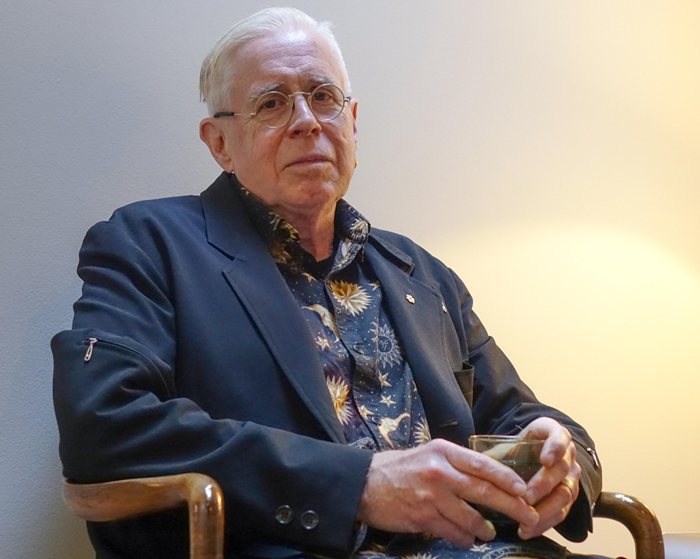 AH: The title of the album is Crowing Ignites. Tell us the story behind this title!

BC: My brother discovered that the Cockburn family motto as part of the coat of arms is “Accendit Cantu” which is a Latin phrase. We were all excited because it was translated for us as “Music Excites” which seemed like a really fortuituous circumstance, especially for somebody like me. But awhile later I was looking up information on the family and it was translated differenty; it was translated as “He Arouses Us By Crowing” and there were some other variations, so finally I looked it up myself, and translated it myself and it came out “Crowing Ignites”! And it was such a punchy phrase it was exciting. My wife suggested I use it for my album title and I thought “yes I should”!

AH: This album is instrumental, as was your earlier album Speechless. In the absence of spoken human language, what does music, on its own, convey?

BC: It’s unusual for music without a lyrical content attached to it to convey a specific idea. But it certainly carries feelings. And it contains the capacity, depending on how the listener approaches it, to transport the listener to a place of their choosing. If I listen to mournful sounding Baroque pieces, for instance, I get a tremendously wistful peacefulness from that music. And there’s music that gets you all fired up and other music that makes you uncomfortable and so on. So it has that capacity as well.

In making music, basically what you hope for is that a listener will get out of it what you put into it, but there are of course no guarantees there. Fundamentally everyone experiences any kind of art through their own filter, and they are going to bring their own understanding of how it fits into their lives to the picture.

You can steer them by your title. But even there, does “Sweetness and Light” mean the same thing to me as it does to everybody out there? Probably not. So you’re always at the mercy of that subjectivity. But that’s both a strength and a weakness. On the one hand you can be specific about what you want to say but on the other hand there is still a universality to the absence of words because nobody has to get stuck on language, which can be another source of various interpretation. And then half the time people don’t understand the words anyway either.

AH: The song “Seven Daggers” has these wonderful layers, and different world instruments. I wasn’t even sure what one of the was when I saw the instrument list. How did you come to choose them?

BC: It was constructed in the studio. As is the pattern for me

, I generally don’t go into the studio to make an album until I know what’s going to be on the album. For this album this was the case, but there were two songs, and this was one of them, that existed in my mind as a concept and had to be developed in the studio, because it was all about the layers.

I had this charango. A charango is a stringed instrument that is a little bit like a mandolin but is native to the Andes region of South America. You’ll hear Bolivian street bands in Europe playing it. I came across this in Chile in the early ‘80s, and I had one and I got another one, and now I have a solid body electric charango which I got in the late 80s that was made by Linda Manzer whose guitars I also play a lot. It’s traditionally tuned to an open A minor 7 chord. And so I thought I also have this sansula, which is kind of like an African thumb piano, and this is a particularly nice version of that with a skin head and it plays so nicely. And its tuned to A minor.

So I had these two instruments that are built to play in A minor, and I thought I can make a pattern here, there’s a piece here. So that’s how it started. And there’s another African instrument in there too, the kalimba.

AH: What about the “little ass bells” you credit in the liner notes? How little are they?

BC: They are quite small! (laughs) Those are a variation of the Indian cowbells you see around in yuppie gift stores sometimes. There was a store in Vermont where I spent a lot of time. This particular store had an incredible array of these bells. The buyer for the store had gone out of her way to get really nice sounding ones, they weren’t clunky at all. These are not tuned in a Western way but they have a really pretty sound to them. So I bought all of them! One of each of the different pitches. Some of them were actually quite large, they were practically a foot long and a few inches around and others that were tiny. I bought a whole selection. And I strung the tiny ones on a metal rod, and you can shake them that way, and that’s what you hear on the record. There are ten of them strung on this thing and they work in a way like sleigh bells, except they don’t sound anything like sleigh bells. They are much prettier.