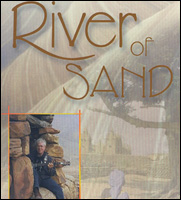 Over the course of several weeks, Bruce traversed this country, over half of it hugging the Sahara Desert, exploring its roots, people, ancient cultures, musical traditions and the ongoing struggle against drought and desertification.

Along the way, Bruce jammed with musicians like legendary bluesman Ali Farka Toure and Toumani Diabate, master of the traditional 21 stringed instrument, the Kora. In the ancient city of Timbuktu, the film team visited prehistoric cliff dwellings in Sanga and met face to face with people working for a brighter future by changing the face of the desert.

River of Sand, which premiered on Vision TV in October 1998, is a travelogue of a different sort – one that touches upon the cultural, musical, and environmental roots of Mali.

River Of Sand is available for Purchase from Kensington TV.