19 July 2019 – Over a career spanning five decades, Bruce Cockburn has traversed an extraordinarily wide landscape on the guitar, from fingerstyle folk, country blues, and gospel to edgy rock and exploratory jazz—all in the service of his songwriting muse. What’s even more remarkable is that he’s done all this not just as a bandleader but also as a solo acoustic performer. In Cockburn’s hands, the guitar becomes a true band in a box, delivering powerful grooves, riffs, melodies, harmonized lines, and improvised solos in real time.

And at 74, Cockburn is certainly not done exploring the instrument, as is obvious from a spin of Crowing Ignites, his 34th album and first-ever collection of all new instrumentals (2005’s Speechless compiled previously released instrumentals along with a few new tracks). The title Crowing Ignites is a rough translation of “Accendit Cantu,” which adorns the old Cockburn family crest. As does so much of his music, the album ranges across folk, blues, jazz, and shades in between, with virtuosic playing primarily on six-string, 12-string, and baritone acoustics. 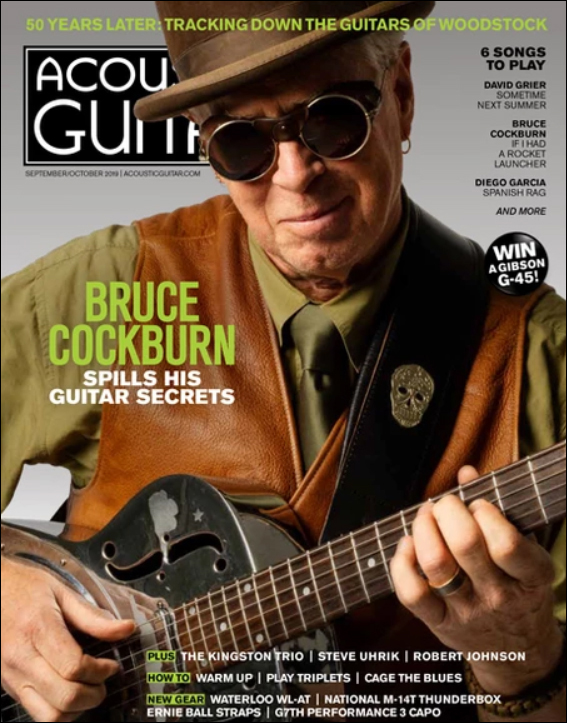 Getting a handle on Cockburn’s multilayered guitar style isn’t easy, even for Cockburn himself. “I don’t think about how I do it—I just do it,” he says on the phone from his home in San Francisco. “But it’s actually quite interesting to try and make it into something communicable.” That is exactly what Cockburn accomplishes in this lesson: He breaks down the key components of his style and demonstrates them through a series of examples drawn from his songs.

Below, you can learn the core guitar parts from some of Cockburn’s best-known songs, such as “Wondering Where the Lions Are” and “Pacing the Cage,” as well as other gems from across his career. At acousticguitar.com, you can not only check out the video of Cockburn sharing excerpts from these songs, but you can see him perform a complete version of “If I Had a Rocket Launcher” (transcribed on page 60 of the print/digital issue) as well as two instrumentals from Crowing Ignites. The result is perhaps the closest and clearest view ever of this guitar master at work.

END_OF_DOCUMENT_TOKEN_TO_BE_REPLACED

Here is the master guitarist at work. 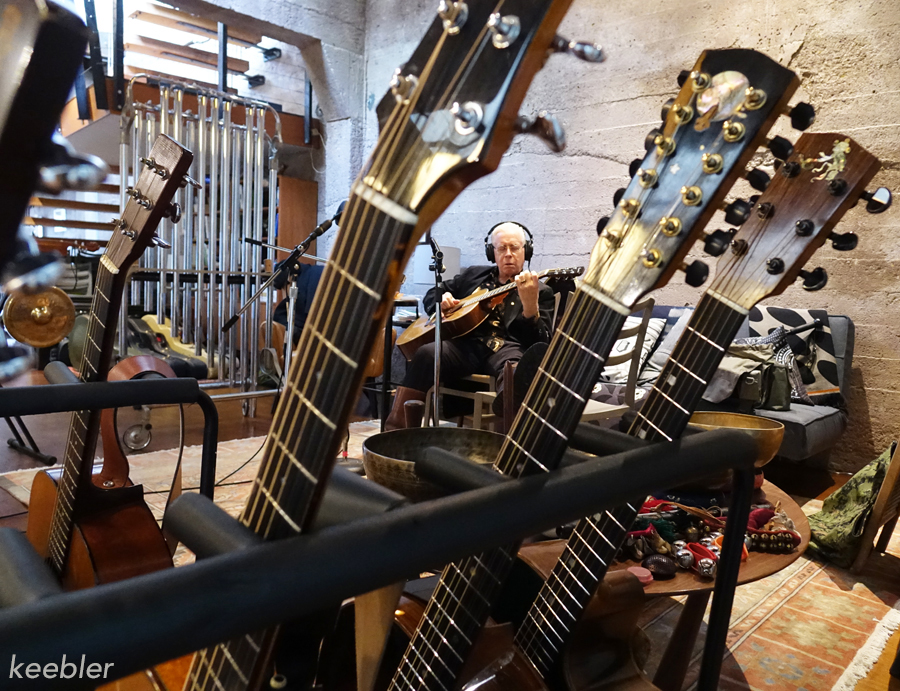 On July 18, 2018 this photo was posted to Twitter by Les Stroud – “Back in San Fran to work with Canadian legend #brucecockburn on my new feature documentary film” – #reallesstroud.

About a week later, Bruce was off to Ashland, Oregon to do the score for a documentary film being made by Les Stroud, aka Survivorman.

In an interview with Les Stroud, by Pamela Roz for CanadianBeats.ca, he revealed the following:

I also have a new independent feature documentary film I am releasing called La Loche. It’s a story based on the school shooting in La Loche, Saskatchewan, Canada in 2016 and about how nature can heal. The score is being done by Bruce Cockburn, along with some songs from Robbie Robertson, myself and orchestration and scoring by David Bateman.

Bruce and Colin Linden were in Toronto, Ontario for the Canadian Folk Music Awards in early December. They then continued working on the new album, doing some recording at Union Sound Company, with Gary Craig and Roberto Occhipinti.

Yesterday, December 10, Bruce was in Nashville with Colin Linden working on his new album. During this session, Bruce’s nephew, JohnAaron Cockburn was adding in some accordian. Here are a few photos Bruce sent along, taken by Colin Linden.

We have two photos from the last day of the recording session, thanks Daniel Keebler.

Two more songs were recorded on day 4.
This photo from Daniel Keebler, shows Bruce and the band Colin Linden, Gary Craig and John Dymond, and Ron Miles, giving a listen back to one of the songs they are working on.

Bruce is in his second day of recording at Prairie Sun Studio, two songs yesterday and two today. Daniel Keebler sent along these photos from todays session.