As much as this vinyl-exclusive three-album collection of Bruce Cockburn, The Charity Of Night and Breakfast In New Orleans…Dinner In Timbuktu commemorates the five decades that the Ottawa-born singer, songwriter and master guitarist has been a recording artist, it also serves as a celebration of 50 years of True North Records, the label started in 1969 by Cockburn’s manager, impresario Bernie Finkelstein.

And the secret sauce to the 50-year-plus management relationship between Bernie Finkelstein and his star client?

“First off, I’m a real admirer of his music – all 34 albums of it,” Finkelstein replied in an interview. “There are 350 to 500 songs out there and I’m probably one of the only people alive that knows them all.

“We’ve done quite well, which helps. The fact that I know all his music wouldn’t mean anything if, you know, if we were down in the dumps all the time.

“Bruce is also very, very easy to work with,” Finkelstein continues. “This is going to sound very simple – and perhaps very simplistic – but if I didn’t call him, I’m not sure he’d ever call me, because he’s not really a big-time careerist.

“It can be very frustrating because Bruce could be even bigger than he is now if he wanted to be. He’s quite content to continue to do things the way that he does it.”

“He’s an interesting character on so many levels,” said Cockburn recently from his San Francisco haunt. “I so admire him. I admire his gift for strategizing. I admire his love of the music, which is deep and genuine.

“He’s a business guy and he thinks like a business guy, but in contrast to other certain people that I’ve run into over the years, he has a really deep understanding of music and very good ears. Although he and I may disagree over this or that or the other thing, when it comes down to it, Bernie’s appreciation of the song is as informed and as sensitive as anybody’s could be.

“That had a lot to do with it – and he was doing what he was doing for the money. He could have made more money doing it for someone else,’” Cockburn laughs. “So, I appreciate the fact that he’s put in all that time and loyalty – I think we’ve been loyal to each other. I’m sure that’s part of it.”

With such a longstanding and mutually rewarding relationship, you’d think there’d be frequent backyard BBQs or frequent socializing.

“We don’t share much socially,” he explains. “We don’t hang out a lot – especially with him in San Francisco and me here, we never did. I think all of those things add up to a relationship that doesn’t get too complicated by other complex things.”

But Finkelstein says he and Cockburn do have certain commonalities.

“We both like getting things done and making sure that things are the best that we can do, all the time. In Bruce’s songs, he’s often referring to things like eclipses and event horizons and things like that that he just drops into songs. We both have a real interest in that kind of thing.” 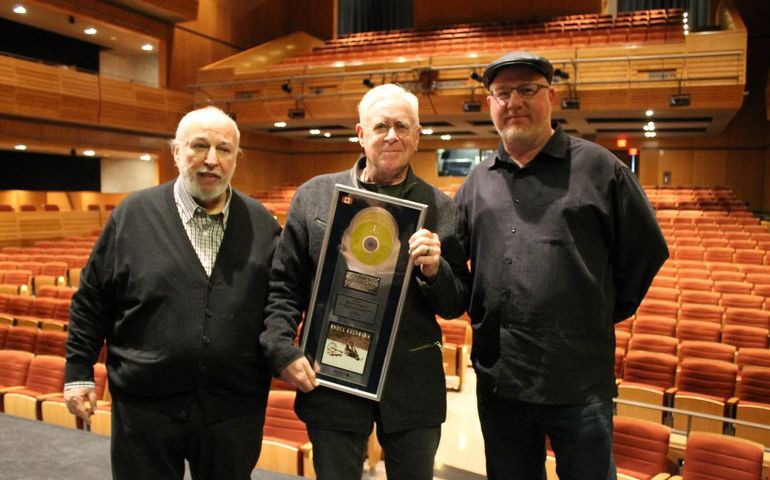 Obviously though, the relationship is important enough to both men that when Finkelstein sold True North, he and Cockburn maintained their handshake management association.

“When I sold True North in late 2007 [to Geoff Kulawick, Harvey Glatt and Michael Pilon], I decided that I was going to mostly retire from the music business, but I thought that Bruce and myself had some unfinished business to do,” he notes.

“So, we stayed on and it’s been another 12 or 13 years since I did that. Things keep rolling along. It’s almost taken a pandemic to make us stop.”

The album flats were shipped to San Francisco for Cockburn to sign at home, then shipped back over the border for assembly. The handsome box set also features a new True North logo designed by Brooke Kulawick and all copies are individually numbered.

As far as the True North label history is concerned, Finkelstein is happy he provided a creative home to help establish acts like Murray McLauchlan, Barney Bentall, Rough Trade and Blackie and The Rodeo Kings – and on the management side, in partnership with Bernie Fiedler – Dan Hill.

“I miss that old label. I’m very, very proud of the work I did with Murray McLauchlan, Rough Trade and all the rest,” said Finkelstein. “We had our fair share of hits, but the one thing we never lost sight of was high quality, not to chase the commercial end of the business.”

In terms of the inclusion of Bruce Cockburn, The Charity of Night and Breakfast in New Orleans…Dinner In Timbuktu as box set choices, Cockburn says it makes sense.

“Of course, you’re going to put the first album on the 50th-anniversary set,” Cockburn notes. “ But the other ones were chosen consciously because they represent stuff I’ve done in a way that’s as good as it gets. Those albums are, within themselves, very complete expressions of the time and set of situations. And they work very well musically.
“Once in a while I’ll hear a track from an older album and think,’ Wow, geez, that was pretty good!!’” he laughs. “It surprises me, not because I forget, but because the path becomes a big wash. When something pops out of that wash that is noteworthy, it catches my attention.”

Cockburn may be contemplating a new album…or not.

“I’m not much of a planner – I never have been, “ he admits. “This year was supposed to be filled with 50th anniversary touring, which of course, it isn’t. We’ll see what of that we’ll be able to apply to next year, but we had that instrumental album that came out a year ago that was going to be one of the things celebrated in that 50th-anniversary tour.

“So, I hadn’t thought much about a next album, really, as I still had the intention and desire of one day doing an album of other people’s songs. I was sort of thinking, well, maybe now’s the time for that. But I’ve got three new songs and now I’m thinking, maybe it isn’t yet time for that.”