Indeed, a conversation with Cockburn isn’t merely a chronological recap of his life; it’s a vivacious discussion about today and tomorrow and the viaduct that links the two. It’s all about his willingness to explore new fields as an artist and as a human. His interaction with his fans, he says, has matured in novel ways in recent years. Up until a few years ago, he had resisted greeting audiences, or signing autographs following shows. Now all that is something he commonly does – and something he enjoys. 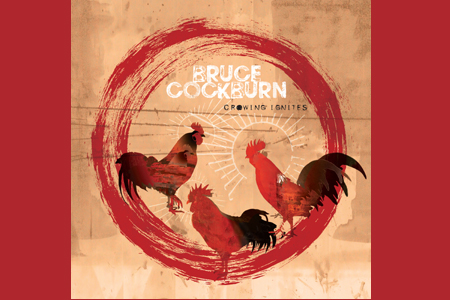 Prolific and multi-dimensional, Cockburn’s stage life has been guided by ingenuity. He decided to go wordless on his recently-released Crowing Ignites album (his second instrumental album, following Speechless in 2005), and he shows no signs of calling off the hunt for the muse.

“I feel like I’ll get on to something – whether guitar-tuning, or a certain way of going at words, like the spoken word stuff of the ‘80s and ‘90s, when what I was doing was exploratory, and expanding the song form. The challenge is to find different ways to put all of that stuff together and still call it a song.”

Cockburn admits that now it’s harder than ever to find untrammeled paths, and confesses that occasionally he finds himself hovering in his own footprints. His job description, however, remains the same: trap the spirit in the scrawling of pen on paper, and then pull bright notes out of six-string, 12-string, and baritone acoustics.

“It’s easy to make mistakes (as a singer-songwriter), and now I mostly worry more about repeating myself than I do copying stuff from other people. In the early days, I went out of my way to avoid being influenced by other singer-songwriters. From the late 1960s to early 1970s, I made it a point not to listen to anything remotely close to what it was I was doing.

“So I didn’t listen to pop music, or singer-songwriters or anything else that was similar to what I was playing. Later on, it was easier because I had established a road for myself that wasn’t like anyone else’s. Now, if I have an idea, and if it seems like a good one, I need to make sure it’s not one that I wrote 20 years ago, and yes, that does happen.

“A lot of songs are stillborn because of that. You are never going to find new thematic material for songs, because life is life. But it’s a little harder as time goes on to find fresh ways of going at things, or not saying what you’ve said before.”

To stay prepared he has embraced everything from folk, reggae, jazz, rock, Latin, and Delta blues, an internationalist slant he has nurtured while travelling to such places as Guatemala, Iraq, Venezuela, Mali, Mozambique, and Nepal.

One of his trips inspired a memorable song that made its way on to “Small Source of Comfort.” Cockburn followed his younger brother, John, a doctor in the Canadian army, to Afghanistan in 2009 for one week. John joined the army at age 55 and worked for the Canadian Forces at Kandahar Airfield. In “Each One Lost,” he recounts witnessing a plane arrive that was carrying the bodies of two Canadians who’d been killed that day.

“I had been in war zones before, but never with an actual military and with people whose language I spoke. I made a song out of it, and I’m grateful when that happens.

It’s interesting to consider Bruce Cockburn’s theme of spiritual growth as an individual path of self-reflection and accountability, rather than one that follows socially-sanctioned rules. At their core, his songs are stepping stones to self-realization and maturity.

“One’s condition is fluid throughout one’s life as an artist,” said Cockburn. “The work evolves because of that inner quest and you are shaped by all of your experiences in life… The closer you get to the inevitable horizon, the less inclined you are to put up with stuff you don’t need.”

Even after forty years in music, it’s evident there are few subjects Cockburn deems unworthy or off-limits. That bold range is manifest in a catalogue of songs touching on topics from the International Monetary Fund to the plight of refugees to dealing with land mines. He’s disciplined about writing on political opinions; something about the messy truth inspires his most bighearted, beautifully rendered music.

Indeed, Cockburn’s most endearing tunes include one of his political tracks, “If I Had a Rocket Launcher,” about the slaughter of innocent civilians from the air in Latin America, and the radio-friendly “Wondering Where the Lions Are,” which peaked at Number 21 on the U.S. Billboard “Hot 100” in 1980.
10 November 2019:

Bruce Cockburn’s music has often been noted for its empathetic qualities, qualities that reflect the artist’s desire to expand his and others’ capacity for empathy and compassion and thinking outside the tribe, so to speak.

“For each of us I think that there is always a kind of inner struggle between having empathy with others and selfishness. So, for me, expanded empathy is a good thing. You need enough ego to survive – it is a kind of survival tool.

“I think we all feel it in different degrees. But beyond that, it’s the fairly obvious sense that we are all in this boat together, and we need to approach each other from that perspective. I’m on a constant campaign to suspend judgment of others. It shouldn’t be the attitude where you only look out for yourself, and to hell with everyone else. People are tribal with the group they feel closest to: their neighbors, their church groups, whatever, and their sense of self expands to include that group, and not anyone else.”

Striving to be both a tribe of one and the head of a family of tens of thousands, Cockburn’s sense of purpose always pulsates through both his close at-hand live performances and reverberations far afield.

“I believe that all living things are made up of music,” said Cockburn. “I see music as my diary, my anchor through anguish and pleasure, a channel for my heart.”