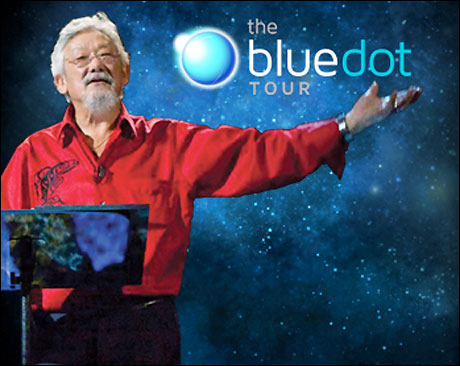 27 July 2014 – So by now you may have heard of David Suzuki’s National Blue Dot Tour. I’m proud to say that Bruce Cockburn will be joining David in Concert in Edmonton at the Winspear Theatre on October 28. This won’t be the first time Bruce has been involved in a show with David as about 10 years ago or perhaps even longer, they did a show together in Ottawa. [poster below]

The Blue Dot tour has an incredible number of great Canadian artists playing in different cities along the way including Neil Young, Feist, The Barenaked Ladies and Jim Cuddy. Check your local market to see who’s playing in your hometown or a town near you. Also attached is a postcard that will alllow to join the Blue Dot Movement and find out more about the event. ~ Bernie Finkelstein 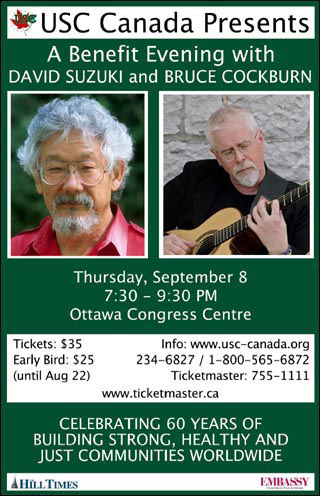 It’s set to visit 20 communities from St. John’s to Vancouver between Sept. 24 and Nov. 9.

The tour is expected to combine concerts with community events.
David Suzuki is pictured in Toronto on January 12, 2014. THE CANADIAN PRESS/Mark Blinch

As the longtime host of CBC’s “The Nature of Things,” Suzuki has developed a rabid following, along with a knack for explaining complex scientific concepts to Canadians in plainspoken language.

Trained as a geneticist, the Vancouver-based scientists has written 52 books and holds 25 honorary degress.

“This is the most important thing I’ve ever done,” Suzuki said of the tour. “I am so honoured that these incredible Canadians are joining me to celebrate the simple yet powerful idea that all Canadians should have the right to drink clean water, breathe fresh air and eat healthy food.”

Others expected to take the stage during The Blue Dot Tour include Emily Haines from Metric, Jenn Grant, Chantal Kreviazuk, Joel Plaskett and children’s performer Raffi.

“All of these incredible Canadian performers, leaders and icons are joining David Suzuki because they share his commitment to protecting the people and places we love,” said Michiah Prull of the David Suzuki Foundation.