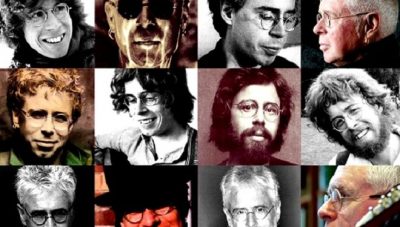 Today, as Bruce Cockburn reaches his 75th year, we can rejoice that he is still a stealer of fire, dancing his sunwheel dance in the falling dark of the dragon’s jaws. Roots Music Canada joins the rest of the world in celebrating his birthday, his music, his Junos, his doctorates, his investiture into the Order of Canada, his inductions into numerous musical Halls of Fame, his redemptive presence as a cosmic troubadour in Samuel R. Delany’s Dhalgren & The Shack by William P. Young, his performances on Saturday Night Live and at Pete Seeger’s birthday party, and his perilous witness, from the front lines of fear, at scenes of political violence around the globe.

Bruce is waiting out this current deterioration of normal at home in San Francisco, “quite a lot busier than what used to be normal,” he reported, “(fathering), listening and reading: Fernando Pessoa’s novel The Book of Disquiet, William Gibson’s Agency, and poetry by Charles Bukowski, Joan Logghe and Wislawa Szymborska. For music, it’s pretty random. Recent listens include YouTube videos of David Russell’s stunning guitar playing as well as various performances by Voces8, Charles Mingus’ Tijuana Moods (an old favorite), the Rolling Stones’ Exile on Main Street, and Schoenberg’s Verklarte Nacht.”

In honour of this birthday, one of Bruce’s first musical friends who celebrated his own 75th in March,, Sneezy Waters, recalled the beginning stages of his journey, saying “When I failed Grade 12 (from too much folly) my parents thought it would be a good idea to switch schools and buckle down. So at Nepean H.S. I ran into Bruce. He told me he played guitar, so I brought my Martin to school one day, and after school we went over to his house to jam. He brought out his guitar, which was a big Gibson hollow-body, just like Wes Montgomery played, and a lovely Ampeg jazz amp. He played so well but wasn’t the least [bit] boastful. He also loved Grant Green’s playing. We really had a good time and arranged many more jams.

“We eventually formed a band called The Children, along with my friends Nev Wells, Sandy Crawley and Chris Anderson. He played some keyboards for us and also played a 12-string, along with a Telecaster.

He was writing back then and encouraging the rest of us to write songs.

The rest, for both of us, is history.”

Fellow musician Ian Tamblyn, who worked with him on 2008’s Dancing Alone: The Songs of William Hawkins, remarked on Bruce’s “composure and openness” in the studio. He also had the honour, in 2014, of presenting Bruce with an honorary Doctor of Laws degree at Carlton University for his work in environmental, First Nations and social causes. In his presentation, Ian noted that “Bruce has had three overriding themes in his work: his great spiritual search, his dedicated call for social justice in the world, and his articulation of the collision of human relationships in these dangerous times.” He continued, “Bruce Cockburn has been both bold and courageous, whether it be in his work with Lloyd Axworthy to end the use of land mines, his environmental work with David Suzuki and Greenpeace, his work on behalf of the Unitarian Service, or his demands for democratic and environmental rights in Guatemala, Nicaragua, Mozambique or Mali.”

His outstanding personal qualities have kept him rooted in long-lasting friendships. Publicist Jane Harbury, who has been buddies with him since their days together at Toronto’s fabled Riverboat, respects him for being always “funny, smart and gracious.” She elaborated: “He doesn’t change on a personal level. He has an ability to make people want to love him. And he remembers everything.” She recalled him best, “coming in the back door of the club in a fluffy old hat with his big dog Aroo.”

Illustrator Michael Wrycraft, who has designed the last nine of Bruce’s album covers, revealed that, “although he comes across as serious, Bruce is actually very light-hearted. Once you get past his professional presence, you find out he has a great laugh.” Their creative collaboration in bringing the unique visuals that accompany every new record together is consistently stress-free (with the exception of the altered American cover of You’ve Never Seen Everything, “which the record company thought looked like speed metal, or the devil.”). Of Bruce’s part in the process, Michael confided, “He plants a germ, a tiny seed of an idea, usually drawn from the album title; and after extensive chat, I come back with the work, and he says “That’s great!” Bruce’s loyalty to Michael’s vision has now stretched over 21 years. Manager Bernie Finkelstein has guided his career for over 50 years now, based upon a handshake.

Michael Reinhart is a composer/singer-songwriter and visual artist who has released five albums, the most recent being eCHO. He lives and works in both Montréal, QC and Edmonton, AB. Recently he’s been creating several new instrumental guitar pieces. He has been a Cockburn fan since his teens. “I loved that on those seminal albums, with so many instrumentals featured, above all I could hear the rich wood tone of the guitar, moreso than the metal of the strings, an analogue sound I still aspire to myself. I’ve never been much interested in doing cover versions, but among the few that I have attempted, ‘Foxglove’ was one that, despite the initial frustrations and physical pain involved, was invaluable to my finding my own way, my own style, my own sound.”

On behalf of all of his friends and fans at Roots Music Canada, we would like to say “Steady on Mr. C., and well done.”