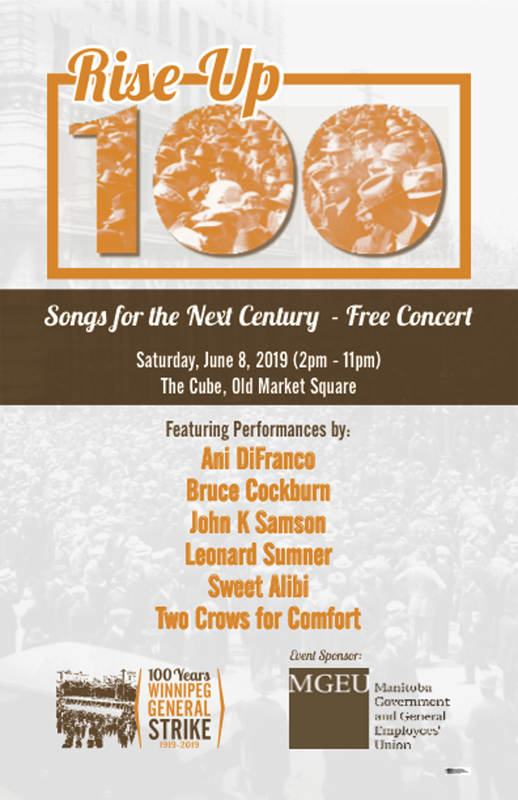 A Canadian music legend is among several artists who will headline a free concert to help commemorate the centennial one of the country’s largest and most influential labour movements.
Rise Up Smaller Poster

For 40 years, Bruce Cockburn has been writing and signing about the human experience. In June, the multi-time Juno Award winner and member of the Canadian Music Hall of Fame will join Grammy winner and feminist icon Ani DiFranco along with several others for Rise Up 100: Songs for the Next Century Concert, one of four events being put on by Manitoba’s unions to celebrate the 100th anniversary of the Winnipeg General Strike of 1919.

“We want to welcome people of all generations, all backgrounds, all abilities — everybody in our city — to join us and celebrate the Winnipeg General Strike together, with music, as a community,” said Winnipeg Folk Festival executive director Lynne Skromeda at a launch event on Tuesday. “Folk music has long been tied to the labour movement, advocating for social justice and providing a sense of connection to one another through divisive times, and we need this connection now more than ever.”

The free concert will take place in Old Market Square on June 8 between 2 p.m. and 11 p.m.

Celebrations kick off with the already-sold-out 1919 Social on May 11 at the Ukrainian Labour Temple. The social will be followed by the Winnipeg General Strike Centennial Gala Dinner on May 15 at the RBC Convention Centre. Tickets for the dinner are priced between $100 and $200. The penultimate event comes on May 25 with the Solidarity Forever Parade & Community Concert. The parade will run from the Exchange District to Memorial Park from 11 a.m. to noon, followed by a concert from 12:30 to 6 p.m.

“We want to invite Winnipeggers, Manitobans and Canadians to come and party with us,” said Manitoba Federation of Labour president Kevin Rebeck. “Come listen to some excellent music and celebrate our shared legacy of the Winnipeg General Strike, which played such an important role in forging the city, the province and the country we all know today.”

The MayWorks Festival of Labour and the Arts began on Sunday and will run through to June 21st with a host of events including book launches, art exhibitions, concerts and other events.

Husband and wife duo Nolan and Sharon Reilly have also updated their 1919 Winnipeg General Strike driving and walking tour, allowing anyone to pick up one of their brochures and walk or drive to important locations and learn about their significance to the Strike.

More information, including tickets for the gala dinner, can be found at mfl.ca/1919.

This will be a free concert on June 8 at The Cube, Old Market Square.

from – The Winnipeg Sun