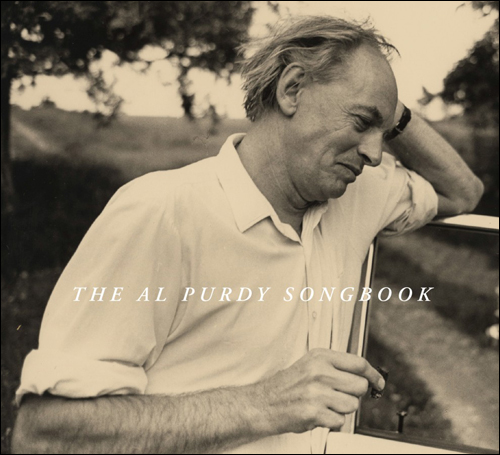 November 2018 – The Al Purdy Songbook celebrates the work of an iconic Canadian poet. Along with its sister project, the film “Al Purdy Was Here,” it was inspired by campaign to save and restore Purdy’s A-Frame home as a writing retreat for a new generation of artists.

“Bruce Cockburn was one of several contributors already deeply familiar with Purdy, and he embraced the challenge as if it were something he’d been itching to do for years. In 3 Al Purdys, a rousing six-minute epic, Bruce lets Purdy’s words come tumbling through the verses as if poured from a pitcher of draft. A generous portion of his lyrics come straight from Transient, Al’s 1967 poem about hopping boxcars on the way to Vancouver as a teenager. The song’s refrain—I’ll give you 3 Al Purdys for a twenty-dollar bill—was inspired by Bruce’s distant memory of a poet selling books on a Toronto street corner. That’s not something Purdy was ever known to have done, but it evokes the scrappy persona of a poet who could connect with the street. Bruce is the only Songbook artist who tried to capture Al’s persona in his voice, adopting a gruff swagger quite unlike anything we’ve heard from him before. This was the first song Bruce had written in two-and-a-half years, ever since becoming a father, and it kindled a new burst of songwriting that led to his 33rd album, Bone on Bone and 13th Juno Award.”