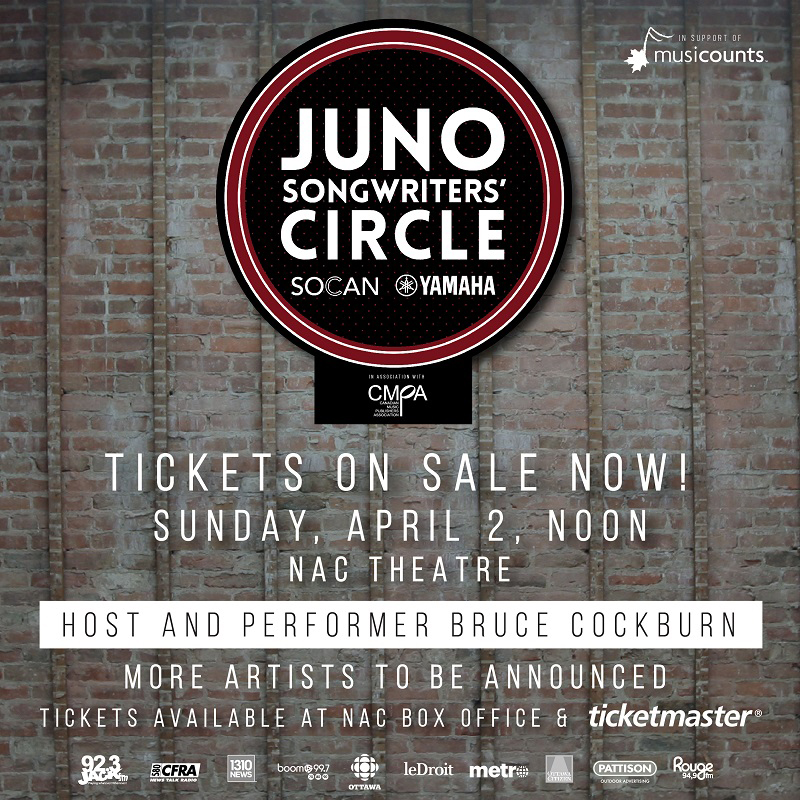 The 2017 JUNO Award nominees joining Cockburn on stage will be announced in February 2017.

About Bruce Cockburn:
One of Canada’s finest artists, Ottawa-born Bruce Cockburn has enjoyed a 40 year long illustrious music career, releasing 31 albums to date. His remarkable journey has seen him embrace folk, jazz, rock, and worldbeat styles while traveling to such far-flung places as Guatemala, Mali, Mozambique and Nepal, and writing memorable songs about his ever-expanding world of wonders. For his songs of romance, protest, and spiritual discovery, Cockburn has been honoured with 12 JUNO Awards, an induction into the Canadian Music Hall of Fame, a Governor General’s Performing Arts Award, and has been made an Officer of the Order of Canada. His guitar playing, both acoustic and electric, has placed him in the company of the world’s top instrumentalists.

He remains respected for his activism on issues from native rights and land mines to the environment and Third World debt, working for organizations such as Oxfam, Amnesty International, Doctors Without Borders and Friends of the Earth.

About SOCAN:
SOCAN connects more than four-million music creators worldwide and more than a quarter-million businesses and individuals in Canada. Nearly 150,000 songwriters, composers and music publishers are its direct members, and more than 130,000 organizations are Licensed To Play music across Canada. With a concerted use of progressive technology and a commitment to lead the global transformation of music rights, with wholly-owned companies Audiam and MediaNet, SOCAN is dedicated to upholding the fundamental truths that music has value and music creators and publishers deserve fair compensation for their work. For more information:

About the Canadian Music Publishers Association:
Canadian Music Publishers Association is the oldest music industry association in Canada (founded in 1949). We create global business opportunities for our members and promote their interests and those of their songwriting partners through advocacy, communication, and education. Website: www.musicpublisher.ca | Social: @canmuspub http://twitter.com/canmuspub

About MusiCounts:
MusiCounts, Canada’s music education charity associated with The Canadian Academy of Recording Arts and Sciences (CARAS) and The JUNO Awards is helping to keep music alive by putting musical instruments into the hands of children that need them most. MusiCounts’ mission is to ensure that children and youth in Canada, regardless of socio-economic circumstances or background, have access to music programs through their schools and communities. MusiCounts achieves its mission through the Band Aid Program, the MusiCounts TD Community Music Program, the MusiCounts Teacher of the Year Award, Scholarships and other music education initiatives.