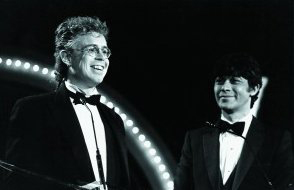 It’s a thrill to be included in the incredible company of artists who make up the Hall of Fame.

I want to thank the Canadian Academy of Recording Arts and Sciences, Ross Reynolds, Randy Lennox and everyone at Universal, the gang at True North for their daily tolerance and support; the many excellent musicians and technicians I’ve had the good fortune to work with and learn from; my family and friends who fed me in so many ways; and Bernie Finkelstein who’s gifts of heart and mind have, for 31 years, kept me visible and audible to people around the world.

David [Suzuki], Gordon [Lightfoot], Sarah [Harmer], Jann [Arden], Terri [Clark] and the [Barenaked] Ladies, you do me great honour being part of these proceedings. The world is richer for having all of you in it and I’m proud to be on this stage with you and, in the case of the Ladies, almost with you [smiles].

It’s been my privilege to be one voice in the human choir during a period which I think will turn out to have been a formative one for English Canadian culture. Over the years there has been a wonderful flowering of creativity and spunk in our music scene, paralleling, often reflecting other currents flowing around us. In the 60s, when I was just beginning to play for people and write songs, the world began to recognize it’s oneness. We had McLuhan, Vatican II, we had Swami Vishnu Devananda dropping chrysanthemums from the air over Belfast and Suez. We had a generation of people, worldwide, who began to appreciate their common burdens and strengths, instead of fixating on what separated them.

This spirit has developed into a widespread embracing of each others music and cultures, at least, important aspects of them. Some people are afraid of this, but to me it’s a positive thing. There is a dark side. That is, the promotion of uniformity by those who’s interest is power by profit. Their job is easier if we’re all the same – if we all like whatever they tell us to like. So much so that they sometime act like we are all subscribers to the same shaky pyramid scheme with them at the top. It’s this thinking that has led to the weakening of national sovereignty, of democratic principles. That has, in effect, hijacked the movement to global community and tried to turn it into commerce under the name “globalization.”

To thrive, society needs a sense that we’re looking out for each other, needs to know where it came from and what sacrifices were made to create it. It needs to be literate as well as web-wise. We have to stop the hemorrhaging in health care and education, the shrinking of environmental safeguards. We’ve got to get past the fad of privatization, the mercantile system sucked when they tried it in the 1700s and it sucks now. It’s our community, it’s our world.

[said very emphatically, accompanied by lots of cheering from audience].

My job is to try and trap the spirit of things in the scratches of pen on paper, in the pulling of notes out of metal. These become songs and the songs become fuel. They can be fuel for romance, for protest, for spiritual discovery, or for complacency. That’s where you all come in. You decide how a song will be heard and felt. I’m filled with gratitude that so many of you have let my songs touch you. To all of you who have done me the honour of listening to what I have to say, thank you. I love my job, I can’t wait to see what I’m gonna do next. I love you.

[big smile as Cockburn says this, opening his arms wide. He then bowed slightly with his hands in the prayer position, like in recent promo photos such as that used on the Project main page, and said “Namaste” (Nepali greeting for “I salute the Spirit in you”)]

Credit: Transcription by Rob Caldwell. From the CockburnProject.net archives.